Bring back hope: how JA and its partner organisations empower Ukrainian children and youth through education 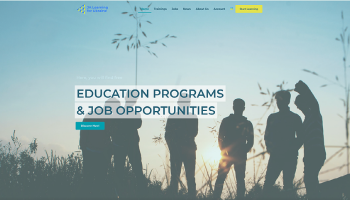 Nearly two-thirds of Ukraine’s children have been displaced since March 2022 both inside the country, as well as abroad. The humanitarian crisis in Ukraine is also an education crisis, and therefore JA mobilised its members and partner organisations to support Ukrainian children and youth in their educational path, so they could develop or maintain the skills necessary to shape their own future. Now, more than ever, we must provide Ukrainian children and youth with concrete opportunities including up-skilling with both cognitive and non-cognitive skills.

JA Europe and its partner organisations such as Accenture, Ardes, Avanade, Citi Foundation, Close the Gap, Deutsche Gesellschaft für Internationale Zusammenarbeit (GIZ), Euronext, EY, Finastra, FERD, GAM Investments, Komputronik, HP, JA Worldwide, Junior Achievement Sweden, Le Bruket, Microsoft, Mitsubishi UFJ Financial Group, PMI Educational Foundation, Seldia, Think Human Foundation / Webhelp, Toyota, UBS, UNICEF, UPS, have been working closely with thousands of displaced Ukrainian youth in different European countries. At the same time, our key partner organisations in Ukraine such as Citi and Metlife have supported educational activities in the country. Despite being displaced across the continent, students working with JA Europe have been able to acquire the skills and confidence needed to further develop their business acumen and ultimately take charge of their own futures. This will prove a vital lifeline for rebuilding their futures, and eventually, the Ukrainian economy.

In Estonia, a group of displaced Ukrainian students formed a JA mini-Company, called UA’ndWe, dedicated to sharing a love for good food and Ukraine. The company has launched Ukrainian national cuisine for the European market. So far, the dishes have been sold at 5 trade fairs, and this success reflects Europe’s eagerness to buy Ukrainian dishes and preserve its culture. UA’ndWe has already received large orders from major international companies stationed in Estonia, and has sold over 75 jars of pre-packaged borsch.

During JA Europe’s Gen-E 2022 competition in Tallinn, a Ukrainian student from the team Nikita Khmilevskiy said: "Our team met for the first time two months ago. We created a company from scratch and began to successfully sell our product here in Estonia. Only thanks to Junior Achievement has it become possible. We felt that same entrepreneurial spirit and we are proud to represent Ukraine here in such difficult times."

Our platform "Learning for Ukraine" is now live. Hundreds of thousands Ukrainian teenagers will now have access to JA best learning programmes in their native language, as well as in English.

Together with our partner organisations, we aim to impact a total of over 350,000 Ukrainian refugees across Europe.

If you would like to join our effort in supporting Ukrainian children and youth on their educational and entrepreneurial path, we look forward to hearing from you! Get in touch with monique@jaeurope.org to explore opportunities for collaboration with JA.

We are pleased to announce that at the beginning of October 400 laptops have been donated and delivered to 20 schools in Poland, to be used by Ukrainian students. Thanks to HP, Fundacja Młodzieżowej Przedsiębiorczości and Komputronik for supporting the next generation of youth.

Another set of computer donations arrived in Lviv - Ukraine, October 2022

JA Europe is the largest organisation in Europe dedicated to preparing young people for employment and entrepreneurship. JA Europe is a member of JA Worldwide® which for 100 years has delivered hands on, experiential learning in entrepreneurship, work readiness and financial literacy. JA creates pathways for employability, job creation and financial success. Together we work in 41 countries in Europe, offering 4 million learning experiences every year in core programmes and inspiring millions more through online events and activities.