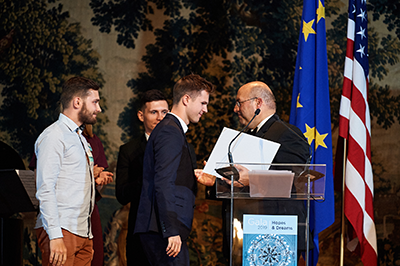 Together, AmCham EU (The American Chamber of Commerce to the European Union) and JA Europe (Junior Achievement Europe) are putting youth entrepreneurship in the spotlight by showcasing young people who have chosen to become entrepreneurs and sending a positive message to the media and policymakers.

Each year, thousands of JA alumni enter Europe’s economy as potential entrepreneurs. Since 2013 the AmCham EU Youth Entrepreneurship Award leverages JA’s network to identify young people who have participated in a JA programme, made it past the initial start-up phase and have a business concept with strong growth potential.

Start-ups with at least one of the co-founders being a JA alumni can apply for the award. Nominees are selected by a jury from JA Europe and AmCham EU, with the winner being invited to the AmCham EU event hosted in Brussels. The event's guest-list usually includes MEPs, policy stakeholders, and AmCham EU members. The winning start-up is being awarded a cash prize of 10,000€ and receive mentoring from members of AmCham EU's Executive Council. In order to make the most of the moment, the selected young entrepreneurs are also given the opportunity to share their business and future plans with the audience.

The goal is to help propel the business into a growth enterprise, which then creates new job opportunities and adds even more value to the economy.