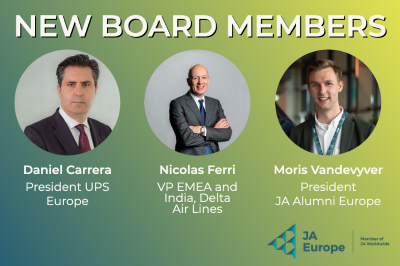 JA Europe Appoints Three New Members Of The Board

Daniel joined UPS in 2005 through the acquisition of Menlo Worldwide, a leading global freight forwarder and logistics company, where he was the EMEA director of global accounts. At UPS, his first responsibility was to integrate the sales functions between Menlo and UPS Supply Chain Solutions (UPS SCS). In 2007, he was promoted to EMEA director of sales for UPS SCS.

Daniel moved from UPS SCS to the small package business unit in 2010, when he accepted the position of director of sales for the South Europe District. Later that year, he was named Spain and Portugal country manager. In January 2014, he returned to business development in Brussels as vice president of sales and solutions for the Europe Region. The following year, Daniel was promoted to president, East Europe District, based in Prague. In June 2020, Daniel accepted the role of president, West Europe District, overseeing UPS operations in Benelux, France, Italy, Spain and Portugal.

Daniel was named president, UPS Europe in February 2021. In this role, he holds responsibility for the largest UPS business unit outside of the United States, directing and overseeing all UPS operations across 56 countries and territories in Europe with more than 50,000 employees. In addition, Daniel also serves as the global advocate for the Diversity, Equity, and Inclusion (DE&I) UPS Council, and as an executive member of the board of the EU American Chamber of Commerce (EU AmCham).

Daniel holds a Bachelor of Arts in international relations from San Francisco State University and Master of Science in management and economics from the London School of Economics.

Ferri has been with Delta for 10 years, serving in leadership roles across the airline’s alliances, international and commercial divisions. In addition to his role with Aeromexico, previous roles with Delta include Vice President – Latin America and Vice President – Alliances Americas, where he was responsible for the region’s profitability and the integration between Delta and its alliance partners across the Americas.

Ferri brings with him broad industry experience, having lived and worked in 10 countries across Europe, Latin America, North America and Asia. He is fluent in English, French, Spanish, German and Portuguese.

Moris is president of JA Alumni Europe, the network of former participants of Junior Achievement programs in Europe. In high school, he founded a JA Company, TieBow, which won the national championship in Belgium (Vlajo) and participated in the JA Europe Company of the Year Competition 2016 in Lucerne, Switzerland. From that moment onwards he became an active member of the JA Alumni community, by participating in the annual JA Alumni Europe conferences, volunteering at events organized by Vlaamse Jonge Ondernemingen (Vlajo), and growing the alumni network in Flanders, Belgium.

Moris has two Bachelor's degrees, one in Business Management from Vives University College in Belgium and another in Innovation and Entrepreneurship from Business Academy Aarhus in Denmark. During his studies in Denmark, he founded a JA Startup, BornGreen, which participated in the Danish Championship in Entrepreneurship 2019 (Fonden for Entreprenørskab) and won the Social Entrepreneurship prize.

In 2022, he obtained his Master's degree in Business Administration from KU Leuven in Belgium and started working at Delhaize Belgium as Management Trainee.

Daniel Carrera, President UPS Europe, said upon his appointment to the Board: "At UPS, we believe entrepreneurship is key to driving innovation, unlocking prosperity, and creating equity. I look forward to working with JA Europe and supporting its mission to inspire and prepare young people to succeed in a global economy."

Nicolas Ferri, VP EMEA and India, Delta Air Lines commented his appointment to the JA Europe Board: "The work JA does is nothing short of remarkable. Their programs are powerful, very well designed and quite literally change lives. I am extremely proud to be representing Delta as Junior Achievement continues to have a lasting impact in the lives of so many."

Moris Vandevyver, President JA Alumni Europe, said: "As an alumnus, I am JA and my JA story is just one out of millions. With JA Alumni Europe, we have a platform to exchange each other's stories and grow together. I'm beyond grateful to represent the alumni and to give back to the great work of JA Europe and its network of countries."

JA Europe would like to thank the following Board members for their work, as they have now reached the end of their term: Léonique van Houwelingen, Maximilian Koch and Shane Spyak.