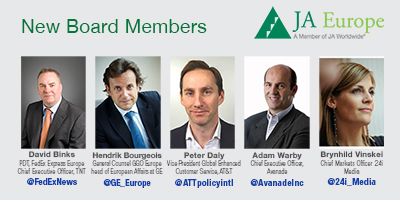 5 new Board Members for JA Europe

On 18 May 2017, at the occasion of JA Europe’s Annual General Meeting, the following new Board Members have been formally approved:

David moved into his current role as President of FedEx Express Europe in January 2014 and assumed the additional position of Chief Executive Officer, TNT in May 2016.
Now based in Hoofddorp, the Netherlands, David leads a team of more than 49,000 in Europe. This represents approximately 50 of the more than 220 countries and territories currently served by FedEx Express globally. In addition to leading the European team in all aspects of planning and executing the corporate strategy across the region, David played an integral role in the acquisition of TNT and will continue to lead the integration.
David began his FedEx career in 1983 in the UK before moving to Brussels, Belgium and later to Toronto, Canada holding positions in marketing, customer service and sales. In 2006, David was named President of FedEx Express Canada. There he developed, implemented and directed all corporate strategies for Canada, as well as leading over 5,000 employees across the country. In 2010, David returned to Europe in the position of Senior Vice President of European Operations, where he played a vital role in strengthening the presence and expanding the footprint of FedEx Express across the continent.
David holds a Bachelor of Arts (Honors) Degree from Coventry University, UK.

His most recent prior positions at GE include General Counsel EMEA, and Senior European Competition Counsel, serving all GE businesses on a wide variety of competition law matters involving mergers and acquisitions, distribution, R&D activities and compliance issues. In   his   preceding   role,   Hendrik   headed   the    legal department   of   one    of   GE’s   business   divisions,   GE Industrial Systems, as European General Counsel. Prior to  joining GE,  Hendrik Bourgeois was  an  attorney with Jones  Day, based in Washington DC and  Brussels, where  he  practiced mainly  US antitrust and  European competition law. Hendrik obtained his law degree at the Rijksuniversiteit Gent, Belgium, and has an LL.M degree from Harvard Law School. He is a former member of the Brussels Bar and current member of the   New York Bar.  Hendrik is a frequent speaker and writer on a wide variety of legal and policy issues. He was elected Chairman of the Board of the American Chamber of Commerce to the EU in October 2011.  He is a board member of GE Europe   NV and   of GE Italia Holding SpA, and chairs the Board of Directors of the GE European Pension Fund OFP.

Peter joined AT&T in March 2007 as the Customer Services General Manager in support of the EMEA business, before transitioning on assignment to the US in 2011 to lead the Service Management team supporting  the Financial Services Signature Client Group. From May 2012 he had operated in support the Executive Vice President of Global Customer Service as the Executive Director – Chief of Staff and Program Management. Since September 2014, in the role of Vice President, he leads Global Enhanced Customer Service Management teams located in 30 countries across 4 regions.
Peter has 25 years of management and leadership experience, 14 of these within the telecoms industry. Following a decade with the British military, Peter chose to pursue a civilian career, which started in Chase Manhattan Bank’s project management team. Peter subsequently entered the technology sector as an account manager with Avaya’s (then Lucent Technologies) Value Added Reseller channel in London, UK. Here he was instrumental in securing new business opportunities and winning major bids for voice solutions, particularly in the City’s niche legal market.
On joining WorldCom’s Global Accounts segment in October 2000, Peter initially assumed responsibility for the front office implementation teams in EMEA.
On joining AT&T in 2007, Peter served as the Customer Service General Manager in EMEA with responsibility for the customer experience across a broad portfolio of AT&T’s global managed services clients before taking up his assignment in the United States in support of AT&T’s financial services clients.
Peter also serves as the executive sponsor of AT&T’s Aspire Mentoring Academy in EMEA which fosters and encourages high school students to stay in education and acquire skills pertinent to the work place. Aspire is currently active with AT&T in 11 locations outside the USA.
In addition to his commercial, customer relationship and leadership skills, Peter holds an Honours Degree in History & Political Science (BA Hons) from the University of Birmingham in the United Kingdom, and a Diploma in Financial Management (DipFM) with the Association of Certified and Chartered Accountants (ACCA). He is a member of the UK’s Institute of Directors (IoD). When not at work, he enjoys running, outdoor pursuits and history.

Adam is Chief Executive Officer of Avanade, which was created in 2000 as a joint venture between Accenture and Microsoft to combine deep industry and business expertise with the leading enterprise software platform.

As a founding member of Avanade, Adam has been instrumental in building the culture of the company which has grown to 29,000 professionals in 23 countries globally.  In 2014, under Adam’s leadership, Avanade established its Corporate Citizenship mission “To help close the gender, income and technology gaps to enable women to better fulfill their potential”
Prior to assuming his current role, Adam served as General Manager and Senior Vice President for the company’s North American and European operations. As Executive Vice President, he also led Avanade’s global sales and marketing teams and set the vision and direction for Avanade solutions.
A true global citizen, Adam has lived in both Europe and North America, and has frequently traveled the globe visiting Avanade clients and regional offices.

Adam came to Avanade from Microsoft, where he was General Manager of the Midwest District, responsible for sales and support of Microsoft software throughout Illinois, Indiana, and Wisconsin. Prior to this position, he was based Microsoft HQ as General Manager of Microsoft's Enterprise Services, responsible for implementing the strategy and plans for Microsoft's direct and partner services organizations.
Adam earned a B.S. in Mechanical Engineering from Imperial College, London.
Adam also serves on the Board of SimCorp, a Danish publicly listed software and services business addressing the needs of the Global Investment and Asset Management industry.

Brynhild Vinskei is the Chief Markets Officer at the leading multi-screen TV app across all devices. In her role as CMO, she is leading the global Sales and Marketing activities for 24i and play an instrumental role in the strategic development, expansion and growth of the company globally.
Brynhild has extraordinary business expertise and marketing leadership, and is recognized in the industry for developing and executing strategies that have accelerated growth and created significant brand value. Her insight and industry knowledge help elevate the 24i brand, enabling the company to respond to the increasing demand for their services globally, and drive revenue growth across their entire product portfolio.
Prior to joining 24i, Brynhild was the Chief Marketing Officer at Xstream,  where she helped establish the company as a leader in OTT solutions. In a career that spans 17 years, Brynhild has held senior positions managing all aspects of sales, marketing, partner management, communication, events, product marketing, strategic planning and business development. Under her leadership, 24i will continue to drive a stronger global market presence and strengthen strategic partnerships with customers and partners.