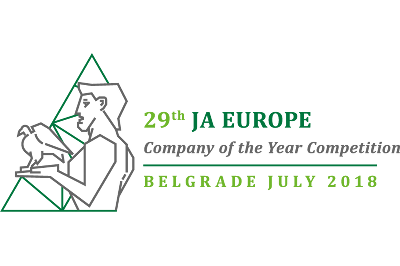 JA Europe Company of the Year 2018: All roads lead to Belgrade

What does software that makes subtitles audible to dyslexic cinema goers have in common with the recycling of automotive parts into new products?

Answer: both were bright ideas developed by teams winning JA Europe’s Company of the Year Competition (COYC). They won in successive years. The Danish company SubReader’s downloadable app caught the jury’s eye in 2016 and the year before it had been the turn of Rauteck from Germany, who offered an eclectic range from bags to bottle openers.

Last year over 340.000 teenage students from more than 40 countries competed for the coveted COYC title. In 2018 the competition, now in its twenty-ninth year, moves to Belgrade where JA Serbia is the host. The teams compete for other awards, offered by sponsoring companies, alongside the premier one of COYC.

There’s no geographical bias in the prize-giving. Over the last five years, companies from 13 countries have taken first, second or third place in the COYC competition.

The variety of products designed, manufactured, or marketed by the winning teams is truly remarkable. Last year Festera from Estonia came up with a ‘biobox’, an indoor food recycling bin that composts bio-waste into home-made fertilizer. Four years ago E14-Magma marketed tableware made from an innovative combination of lava and black clay. There’s no prize for guessing that the students behind this idea are Icelanders! And in 2013 the quaintly named Estonian company 3 Little Pigs developed science shows featuring hands-on experiments for 6-12 year olds.

The teams may be made up of students but there is nothing academic about their businesses. The companies the students set up are ‘real’ and their websites list real products for online sale. The students follow JA’s Company Programme, still the only tailor-made in-school course designed to empower young people to set up and run a real business over an academic year.

We can expect a fiercely fought competition in Belgrade. Winning national teams from 39 countries will each be doing their level best to persuade 11 jurors that their product is the best. What a list of products! For example: second hand designer clothes and shoes (Sweden), wristbands imprinted with the wearer’s medical data (Serbia), cups and drinking straws from compostable materials (Malta), and essential hand tools no bigger than a credit card (Austria). And let us not forget (far less confuse) snack bars of locally bred crickets (Finland) and an organic fertiliser made from seaweed (Cyprus).

Does the competition have an overall theme? At the product level, it is hard to see one. Many of the teams promote products that are explicitly sensitive to the environment. Several focus on road safety. For others personal comfort is the goal. But at other levels, themes appear. Innovation is one. Novelty is another. So is its inverse with established products twisted into something new. What unites all the teams is their imagination, commitment and enthusiasm – and, of course, their youth.

Who knows what the result will be? One thing is certain. As Caroline Jenner, JA Europe’s CEO, put it a couple of years ago:

“The JA Company Programme continues to inspire thousands of young people year after year. It is driven by local partnerships between businesses and schools; a unique real-world programme that develops young people’s entrepreneurial competences, financial capability and builds key skills for the workplace. JA Company Programme alumni are twice more likely to start a business later on than non-participants and are less likely to be unemployed.”

Being a COYC winner is a remarkable achievement; no doubt about that. It is public affirmation that the highest quality has been attained. But it is more than that, too. Being good enough to compete, and having graduated from a company programme, is itself a reward. It demonstrates the successful acquisition of key life skills.

So: roll on Belgrade! And good luck to all the competing teams.