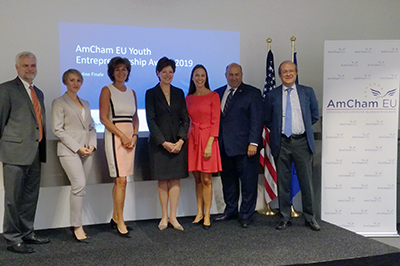 Each year, thousands of JA alumni enter Europe’s economy as potential entrepreneurs. Since 2013, AmCham EU and JA Europe team up through the AmCham EU Youth Entrepreneurship Award to recognize young people who have participated in a JA programme and are now running businesses with strong growth potential.

5 candidates were shortlisted to take part in the online finale on 12 September, in the presence of a high level jury panel, composed by:

The jury selected the top 3 to be invited to AmCham EU’s annual Gala on October 2nd in Brussels, with high-level stakeholders and AmCham EU members as guests. These young people will be given the opportunity to tell the audience about their business and future plans, to meet with AmCham EU executive committee members and network with the audience. The gala will also be the culminating point of the award, when the winning team will be announced and receive a public recognition of their work . This is in addition to a cash prize of €10,000 and several hours of mentorship over a 12-month period from a number of ExCo members who will coach, encourage and offer their time, expertise and advice.

Learn more about the top 3:

Biofy designs and sells modular plants that turns landfill bound plastic waste into low sulphur fuel, which can be directly used in machinery or blast furnaces or refined into more conventional fuels. The price is lower and more stable than the one that comes directly from petrol, thanks to their local production.

eAgronom is an AgTech start-up founded by farmers, financed by farmers and developed via farmer feedback.  It was started by a JA alumnus who didn't find suitable software for his father's farm. He learned how to code and made a first version himself. Today, hundreds of farmers use eAgronom in 7 countries and trust the company with its data organization and AI suggestions.

Edumus helps working professionals to go back to school and teach one grade, one subject at a time. For working professionals, Edumus is a self-development program to learn and practice leadership and training skills. As the lack of teachers is worsening, Edumus offers a complementing approach which is less demanding for teachers and can become a catalyst for positive change.

Congratulations to the three finalists, looking forward meeting you on October 2nd !