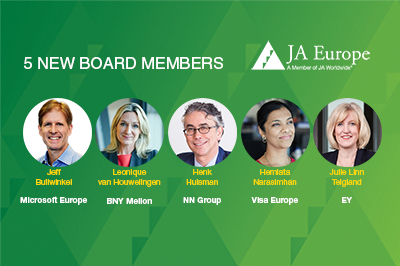 JA Europe appoints five new members of the Board

On 18 November 2019, at the occasion of JA Europe’s Annual General Meeting, the following new Board Members have been formally approved:

Jeff is based in Amsterdam and oversees the company’s legal and corporate affairs teams across the region, providing support for commercial transactions and regulatory counsel on public policy issues such as IPR, cybersecurity, competition, and international trade. Mr. Bullwinkel joined Microsoft in 2000 and previously held a number of senior roles with the company across the Asia Pacific region, based in Hong Kong, Singapore and Sydney.
Prior to joining Microsoft, Mr. Bullwinkel was with Simpson Thacher & Bartlett, an international law firm based in New York. Mr. Bullwinkel also served as a federal prosecutor with the Office of International Affairs, Criminal Division, US Department of Justice, where he was responsible for a wide range of matters relating to international law. Mr. Bullwinkel is originally from the New York area. He graduated from Duke University with a Bachelor of Arts degree and received his law degree from New York University. He is a member of the New York State Bar.

Leonique has been CEO of The Bank of New York Mellon SA/NV  since April 2018 and prior to this she served as an Executive Board member of BNY Mellon’s European bank, Asset Servicing Business Head for Continental Europe as well as Country Executive for The Netherlands.
After graduating from her civil law studies at the University in Leiden, The Netherlands, Leonique started her career at ABN AMRO Bank in 1995 where she went on to hold various managerial roles in areas including Export Finance, Fixed Income Transaction Management, Legal and Working Capital.
Leonique moved to BNY Mellon in 2003 when the bank created a joint venture company, ABN AMRO Mellon Global Securities B.V., to provide custody and related services to financial institutions outside North America. She initially oversaw the creation and management of the new joint venture’s Legal, Risk and Compliance department. Three years later, following BNY Mellon’s purchase of ABN AMRO Bank’s 50% share in the custody joint venture, she took on a new role as Head of Relationship Management - Asset Servicing for BNY Mellon’s continental European clients and in 2009 she assumed an additional role as Country Executive for The Netherlands.
Leonique is a board member of the Foreign Bankers Association in The Netherlands. Leonique is a vocal advocate for diversity and inclusion within financial services. To this purpose, she sponsors and supports a number of BNY Mellon’s Mellon’s inclusion and corporate social responsibility initiatives.

Henk Huisman holds a masters degree in Macro Economics from Groningen University, the Netherlands. He started his working career with the Ministry of Finance in the Netherlands in 1989, where he was involved in the preparations of the European Economic and Monetary Union (Maastricht Treaty).
Between 1993 and 1996 he worked for the International Monetary Fund in Washington D.C.. In 1996 he returned to the Netherlands and joined the Dutch Central Bank, where he was manager of the European Policy Unit.
In 2004, he started working at ING Bank in Amsterdam as head of External Communications, and subsequently in 2009 as Deputy Director Public and Government Affairs.
In 2016 he joined NN Group to become Head of Public and Government Affairs.

Hemlata leads the growth, strategic development, and account management for some of Visa’s largest acquiring and merchant relationships across Europe. She focuses on bringing together the technical, commercial, and strategic aspects of payments and Visa solutions to drive growth and innovation for clients. Prior to joining Visa, Hemlata spent six years at American Express across the UK and the US. In this time, she managed a portfolio of large B2B clients in the US as well as worked across the co-brand issuing and strategy parts of the business. Her previous experience includes strategic consulting at the Boston Consulting Group in the US and Australia where she led sales/commercial engagements across key clients in healthcare and services sectors.

As EY EMEIA Area Managing Partner Julie leads more than 115,000 people across 98 countries and is responsible for international tax advice, auditing, advising large clients and accompanying business transformations.
With nearly three decades of experience in professional services for international clients, she accompanies her clients in transformation processes, focusing on the challenges of digital transformation and is committed to the sustainable development of capital markets and their framework conditions. Julie has served as lead partner for several Fortune 500 clients.
Previously, she led one of the largest EY regions in EMEIA: Germany, Switzerland and Austria, where she led business transformation efforts within EY and with clients, as well as led several major acquisitions.
Julie, who also serves as the Global Leader for EY’s Women. Fast forward initiative, is a key player in progressing gender equality issues. She is a prominent voice of the Women20 (W20) global agenda.
Julie serves on several boards across Europe and the US, such as the UN EQUALS, Atlantik Brücke and the American Council on Germany.
Born in the US, Julie has been living in Germany for more than 30 years. She studied business in Heidelberg, Frankfurt and Paris and qualified as a US Certified Public Accountant. Julie enjoys traveling and skiing.