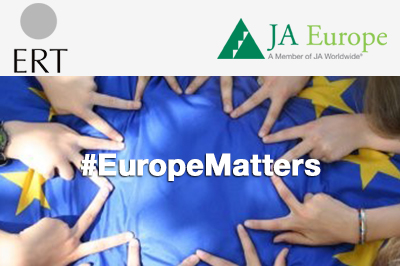 New project to re-engage young people on why Europe matters

A major new initiative labelled ‘Why Europe Matters’ is today being launched to re-engage Europe’s youth in a multinational debate with politicians and business leaders.

The European Round Table of Industrialists (ERT) and JA Europe are to survey more than 10,000 youngsters about their hopes and concerns.

The cross-border project – launched to mark the 60th anniversary of the Treaty of Rome – aims to increase enthusiasm and interest in forging a stronger Europe.

The aspirations of those Europeans most affected by economic and political turmoil across Europe in recent years are to be addressed as part of a major new initiative that seeks to re-engage young people in a cross border debate.

Yet Europe’s youth remains the EU’s greatest source of inspiration and opportunity, the very foundations of the Treaty of Rome, which established the European Economic Community on 25 March 1957. Only by making youth a priority and re-engaging with the visions, concerns and ideas of young people can Europe hope to overcome the challenges which have rocked it and renew confidence that stability can return.

“By teaming up with the ERT, we aim to contribute to a stronger and more entrepreneurial Europe—one that is making the most of its youngest human capital. We need more entrepreneurs and new growing businesses in Europe and these, in turn, need skilled and enterprising employees. We also need to hear what young people think about Europe and what they want it to become. It’s their ideas that will sustain it in the future,” says Caroline Jenner, CEO at JA Europe.

“It is vital to understand the hopes and expectations of young people to further advance and improve the European project. This joint initiative with JA Europe is an attempt to re-engage young people in a dynamic dialogue on where they think Europe should be heading.” says Brian Ager, Secretary General at ERT.

The partnership aims to involve young people in a series of activities around the theme of ‘Why Europe Matters’. Based on a survey among young people and their perceptions of Europe’s future, several design thinking workshops will be organised across Europe involving young people and business leaders. They will exchange views on their vision about the EU, how they do/would like to benefit from it, how to better hear young people’s voices, and discuss topics such as Europe’s economic development and youth employment. A final event gathering all stakeholders involved in the project and EU policy-makers will take place in the 1st quarter of 2018.

Promoting a stable and peaceful Europe is a shared responsibility.

The European Round Table of Industrialists (ERT) is a forum bringing together around 50 Chief Executives and Chairmen of major multinational companies of European parentage covering a wide range of industrial and technological sectors. Companies of ERT Members are widely situated across Europe, with a combined revenue exceeding € 2,250 billion, sustaining around 6.8 million jobs in the region. They invest more than € 50 billion annually in R&D, largely in Europe.
ERT advocates policies at both national and European levels, with the goal of improving European competitiveness, growth and employment. www.ert.eu

JA Europe is Europe’s largest provider of education programmes for entrepreneurship, work readiness and financial literacy, reaching 3.5 million students in 40 countries in 2016.
JA Europe brings the public and private sectors together to provide young people in primary and secondary schools and early university with high-quality education programmes to teach them about enterprise, entrepreneurship, business and economics in a practical way.
JA Europe is the European Regional Operating Centre for JA Worldwide® (www.jaworldwide.org)