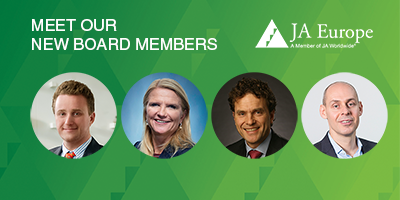 4 new Board Members for JA Europe

On 6 December 2018, at the occasion of JA Europe’s Annual General Meeting, the following new Board Members have been formally approved:

Thomas Archer Bata, was the CMO Bata Group since December 2015 until September 2018, previously head of operations at Bata Group in Chile, he is the great grandson of the founder and the fourth-generation of the Bata Family.

Born in Toronto, Canada and raised between the UK and Switzerland, he holds a MA in Political Science from the University of Edinburgh. He has a passion for people and innovation which are the main areas of focus in driving his business agenda as well as his personal interests. He speaks English, French, Spanish and Czech and is a Skiing enthusiast spending free time in the mountains whenever possible.

Helena joined FedEx in 1995 as Senior Financial Analyst, EMEA and, after holding positions in several functions across the Finance organization, was promoted to VP, Finance, EMEA in 2009.

Helena has had particular success leading the redesign of processes and systems. Her leadership has promoted a culture of continuous improvement in control and accounting processes – particularly those where automation can play a key role.

In 2015, she was appointed VP Finance - Europe. In that role, Helena led the Financial Planning & Analysis for the Europe region, including decision support for the European businesses, with responsibility for all FedEx Ship-to-Collect processes.

Helena actively supports the FedEx Finance Talent Management program – an initiative close to her heart – and also sits on the board of non-profit organisation JA Europe. Helena advocates for entrepreneurial education programs, such as the JA Worldwide Company Program and Enterprise without Borders – both of which have enjoyed long-term support from FedEx Express in Europe.

Prior to joining FedEx, Helena was a Management Consultant in Sweden for two years, then Lead Auditor at Philip Morris in their Brussels offices for another two years. She was born in Gothenburg, Sweden, and graduated from the University of Linkoping, Sweden. She has lived in Belgium for over 25 years and has two children, Linn (16) and Eric (13).

In 2013 and 2014 next to his Dutch responsibilities, Frits was also responsible for Manpower Germany.
In 2015, Frits stepped into the role of Vice President Sales & Marketing for ManpowerGroup in Europe, responsible for our commercial performance in Europe and the management of Global Accounts.

In 2012 Frits joined the advisory board of JINC, the Dutch organization dedicated to the interests of children with a disadvantage to the labor market. JINC organizes job interview trainings, internships and events to create for these children a chance on a better future.

Frits is also a board member of the Junior Achievement Europe, Europe's largest provider of education programmes for entrepreneurship, work readiness and financial literacy (Non-profit).

Jan Van Autreve
Chief Executive Officer and Member of the Board of Directors, NN Belgium

Jan Van Autreve was appointed Chief Executive Officer and Member of the Board of Directors of NN Belgium as from 1 July 2016.
He has an impressive track record in the financial services sector, including senior management positions at Delta Lloyd, Swiss Life and KBC Securities. Before becoming CEO of Delta Lloyd Life in 2010, he served the company in a succession of positions including CIO and COO. The common thread that runs through his career path: outstanding skills in management, business transformation and strategy development.

Under his stewardship as CEO, NN continues to deliver its core values through a forward-looking strategy that is clear, credible and customer-oriented. Jan is guiding and supporting the company to shape a bright future and achieve business success.
In addition to his CEO responsibilities, he holds several mandates.

Jan Van Autreve holds a master’s degree in Applied Economics - specialization in Corporate Finance - from the University of Ghent in 1997.

He is also passionate about his family and friends, nature and adventure, literature and cycling – a man of many talents.