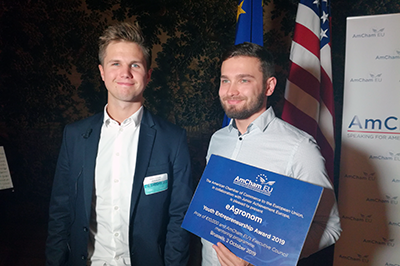 The American Chamber of Commerce to the European Union (AmCham EU) and Junior Achievement Europe (JA Europe) are delighted to announce that eAgronom, an Estonian start-up, is the winner of the seventh AmCham EU Youth Entrepreneurship Award.

At a time when European agriculture is facing unprecedented challenges, from production efficiency to sustainability and resilience, eAgronom was praised for its contribution to biodiversity and environmental sustainability. By awarding the prize to eAgronom, the international jury composed of Daniel Calleja-Crespo, Director-General for Environment at the European Commission; Susan Danger, CEO of AmCham EU; Joanna Gill, Deputy Bureau Chief of Euronews, Mark Libby, Deputy Chief of Mission at the United States Mission to the EU; Eva Maydell, Member of the European Parliament from Bulgaria, and Lou Rivieccio, President of UPS Europe also wanted to send a signal to young people to get engaged in this crucial sector for the EU.

eAgronom is an AgTech start-up founded by farmers, financed by farmers and developed from farmer feedback. It was initiated by a JA alumnus, Robin Saluoks who could not find suitable software for his father's farm. He learned how to code and made a first version himself. Today, hundreds of farmers use eAgronom in 7 countries and trust the company with their data organization and AI suggestions.

“We are so happy that our business has convinced the jury member of the AmCham EU Youth Entrepreneurship Award. We are fully convinced that the most profitable way of farming is also the best way for the environment. With this prize, we are looking forward to continuing the development of eAgronom and scaling it up throughout Europe and the world!” said Robin Saluoks, co-founder of the start-up eAgronom.

One could say Robin already qualifies as a serial entrepreneur: back in 2013, he created as part of the Junior Achievement Company Programme with two other classmates a student company called Three Little Pigs (Kolm põrsakest). The mini company first won the Estonian Company of the Year 2013 before conquering Europe and winning the JA Europe Company of the year Competition that same year.

The AmCham EU Youth Entrepreneurship Award, organised in collaboration with JA Europe, aims to encourage and support the entrepreneurial mindsets of young Europeans. The winner received a cash prize of €10,000 and will be offered several hours of mentorship over a 12-month period from a number of senior executives from AmCham EU’s member companies who will coach, encourage and offer their time, expertise and advice. The other two finalists included Biofy from Spain and Edumus from Estonia.

Susan Danger, CEO of AmCham EU, said: “We all felt truly inspired by the story of eAgronom and their drive to address one of the world’s most pressing issues, the sustainability of agriculture. With a strong business model, they make such a positive impact on society. We are proud to support young and talented entrepreneurs. They are the future of the European economy.”

Caroline Jenner, CEO at JA Europe, shared: “For the seventh year already, JA Europe is organising the Youth Entrepreneurship Award in partnership with AmCham EU. Through this collaboration, we are committed to equipping more young people with the skills they need to become successful entrepreneurs like eAgronom and whose participation in the JA Company Programme showcases the impact it can have on later careers”.

About AmCham EU
The American Chamber of Commerce to the European Union (AmCham EU) AmCham EU speaks for American companies committed to Europe on trade, investment and competitiveness issues. It aims to ensure a growth-orientated business and investment climate in Europe. AmCham EU facilitates the resolution of transatlantic issues that impact business and plays a role in creating better understanding of EU and US positions on business matters. Aggregate US investment in Europe totalled more than €2 trillion in 2018, directly supports more than 4.8 million jobs in Europe, and generates billions of euros annually in income, trade and research and development.

About JA Europe
JA Europe (Junior Achievement Europe) is Europe’s largest provider of education programmes for entrepreneurship, work readiness and financial literacy, reaching 4.2 million students in 40 countries in 2018-2019. JA works with the education and business communities as well as governments to provide young people from primary school to university with experiences that build the skills and competences they will need to succeed in a global economy. JA Europe is the European Regional Operating Centre for JA Worldwide®.